History of The Club

Golf was first played locally on Llantrisant Common by permission of the Llantrisant Trust and Freemen in 1923. It is not known how permission was granted in the first place as severe rules applied to leisure pursuits thereon; it was not long before local objections (digging up the greens etc!) resulted in the Club ceasing to exist.

In 1926 a group of business men from Llantrisant, Pontyclun and Tonyrefail held a meeting to discuss the formation of a golf club in the Talbot Green area and in 1927, 55 acres of land was leased from a local farmer who retained the farm buildings and the grazing rights.

A wooden-framed one room structure was erected with a small adjoining hut as the professional’s workshop. The annual fees were two guineas for men, one guinea for ladies and debentures issued at £1 which proved to be life-saving when the club hit lean times in the 1930s. Sir Rhys Williams of Miskin Manor was the first President.

There was no bar and no golf on Sundays and the grass mower was horse powered, followed by a huge American car in about 1936 when an extra 10 acres were leased.

In 1940 officers of Western Command were stationed at Danygraig House and a searchlight battery sited on the course. In August of that year the Clubhouse burned down; this was not due as rumoured to an air-raid at that time when a land-mine killed 2 people in Talbot Green post- office. Creigiau Golf Club kindly invited the Club to use its facilities during the rebuilding period of only 5 months.

In 1947 the land was purchased from the local estates and a further 20 acres alongside the Tonyrefail road. More land was available across the river but for the sake of £200 the offer was rejected. In the 1950s new locker rooms and kitchen and steward’s quarters were built and the course extended to 12 holes.

The club in the 1960s was very successful in the Glamorgan leagues and had several county players but then in the1 970s achieved the ultimate.

In 1976 the Club held the afore-mentioned Welsh Amateur Title, The Victory Shield, the Division 1 championship; the Glamorgan County Title and several members of the first team represented the County which won the Channel League.

Further land was developed in the late 1990s so creating the current layout, a challenging 18 hole course with undulating fairways and small greens.

I am sure you will agree that the course looks so different from the air.Why not come experience the course in all its summer glory. 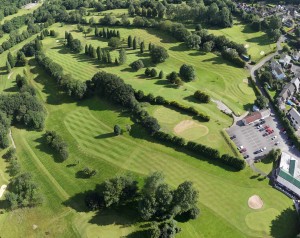 We would like to offer our thanks to David Field of Drone Tech Aerospace for your professional approach in producing our video.