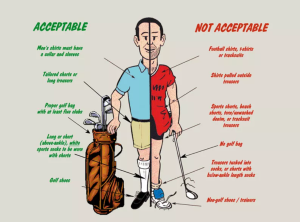 It describes the manner in which the game of golf should be played to ensure all players gain maximum enjoyment.

In short, it’s about “respect”:

Respect for the course – leave the course as you would like to find it by repairing pitch-marks, replacing divots and raking bunkers

Respect for your fellow players – be sportsmanlike and polite, stay by the green to watch them hole out, and avoid distracting them

Play at a Good Pace and Keep Up

Priority on the course is determined by a group’s pace of play. Any group playing a whole round is entitled to pass a group playing a shorter round. The term “group” includes a single player.

Consideration should be shown to others on the course at all times.

Wait until the players in front are out of range. Players should always alert greenstaff nearby or ahead when they are about to make a stroke that might endanger them.

If your ball is heading in a direction where there is a danger of it hitting someone, shout a warning immediately. The traditional word of warning is “fore”.

Be Ready to Play

You should be ready to play as soon as it is your turn to play. When on or near the putting green, leave your bags or carts just off the green on the way to the next tee. When the play of a hole has been completed, leave the putting green quickly.

If you think your ball may be lost outside a water hazard or is out of bounds, to save time, play a provisional ball. Players searching for a ball should signal the players in the group behind them to play through as soon as it becomes apparent that the ball will not easily be found. They should not search for five minutes before doing so. Having allowed the group behind to play through, they should not continue play until the group coming through has passed and is out of range.

Before leaving a bunker, players should carefully smooth over all holes and footprints with the rakes provided.

Players should carefully repair any divot holes and any damage to the putting green made by the impact of a ball (whether or not made by the player himself/ herself).

We are pleased to announce our new Travel Partner, Leyla Kent of Not Just Travel